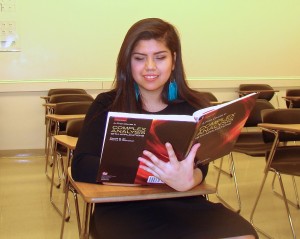 When asked what the hardest mathematics course at the College was, senior mathematics major Zonia Menendez laughed and said, “All of them!” However, she is adamant that she has never let a challenge discourage her.  And now—in between thoughts of intervals, matrixes, formulas, theorems, and functions—she looks forward to attending graduate school next year after accomplishing so much in her four years at the College.

“Math is a universal language everywhere you go,” she says, which is exactly why she sees the beauty in it. Menendez remembers how growing up with English as her second language led to some difficulty in her literacy-related courses, but she excelled when it came to numbers and equations.

Menendez certainly has a passion for computing and calculating.  She was one of nine students in the United States to attend a Research Experience for Undergraduates (REU) program in Washington D.C. to study Knot Theory in the summer of 2015.  She is also a member of Pi Mu Epsilon (Mathematics Honor Society) and received the Junior Achievement Award from TCNJ’s Department of Mathematics and Statistics.  This spring, she was inducted into two national honor societies: Phi Beta Kappa, the nation’s oldest academic honor society for liberal arts and sciences, and Phi Kappa Phi, the oldest all-discipline honor society in the United States.  In addition to her love of math, she is also a member of the intramural soccer team and the pep band and loves to sing and play the drums in her free time.

However, math remains her true passion.  “Her enthusiasm for math is obvious,” says Dr. Karen Clark, associate professor of mathematics, who describes Menendez as a delight to have in class. “She asked lots of great questions and would often see where I was going in a lecture before I got there.”

Furthermore, fellow mathematics major and Pi Mu Epsilon President Alana Huszar ‘16 raves about Zonia’s incredible work ethic. “She is definitely a star of the math department,” Huszar says. Menendez has been heavily involved with Pi Mu Epsilon’s events, such as helping host the “Integration Bee” and “Are You Smarter than a TCNJ Student?” events. “I look forward to seeing Zonia go onto graduate school as she has been a vital member of the math department,” says Huszar. 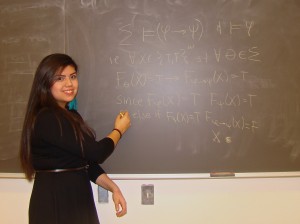 Menendez will be attending Wesleyan University for a PhD in mathematics with dreams of becoming a professor or doing research in algebra, eager to make a name for herself in the math world.  And despite the fact that math-related fields are often more populated by men, Menendez sees almost an equal balance of male and female students in her classes at TCNJ.  “It’s nice to not have women in the background,” she says about the College’s fairly equal gender ratio, but she admits how it might be different for her once she graduates. Grateful for her mathematics education here at TCNJ, she says that collaborating with men on math projects has really trained her for the future. “I can hold myself in a room of guys and still be strong.”

But what’s driving Menendez to work so hard? Her inspiration for excelling in school comes from her hard-working and supportive parents. “Everything I do is for them,” she says.  “Ultimately, I just want to get my PhD and earn enough money so they can stop working.”

Among her words of advice to incoming math majors, Menendez stresses the importance of putting in the time into the coursework and how in several of the introductory classes such as calculus, “You just have to do problem after problem until you understand it.” She warns how the theoretical courses may be a little tricky, but reminds students to always ask for help if they need it and to not give up until they solve the problem.

Dr. Cynthia Curtis, professor of mathematics, who has taught Menendez in Linear Algebra, Knot Theory, and an Independent Study course in Topology, adds, “She often has real insight into problems, and she is always ready to share her understanding with her peers.  It has been a pleasure working with her.”