Many TCNJ students and alumni are familiar with the incredibly beautiful image on the cover of the Spring 2016 issue of the TCNJ magazine.  This image, and many more that are included within the issue, are a product of the new SEM (Scanning Electron Microscope) and the recent Physics graduate who produced the images, Lucas Bancroft.

Bancroft graduated from TCNJ in the spring of 2016 and moved to Nevada to begin his graduate studies at the University of Nevada in Reno (UNR) and conduct his doctoral research at the Desert Research Institute. From presenting a poster at the International Conference on Clouds and Precipitation in Manchester, England to studying atmospheric science at UNR, Bancroft’s journey as a man of science has taken him far and wide, but its beginnings lie largely here at TCNJ.

After being inspired by two physics teachers in high school, Bancroft came to TCNJ to major in physics.  During his time as a student at TCNJ, Bancroft participated in many research opportunities, including independent research courses during the academic year and the during the summer in TCNJ’s Mentored Undergraduate Student Experience (MUSE) program.  His summer with MUSE along with two of his independent research experiences were spent working with his faculty mentor Dr. Nathan Magee. In his first independent research experience, Bancroft studied cloud microphysics, which ultimately continued into both his second independent research opportunity and his summer research during MUSE.  These experiences mainly entailed sending weather balloons up to around 18 km altitude to collect ice crystals  directly from cirrus clouds and then analyzing the ice crystals in the TCNJ’s cold-stage Scanning Electron Microscope (SEM). “We looked specifically at the surface roughness of the crystals since that affects the radiative forcing of the cirrus clouds,” according to Bancroft.

The SEM became an integral research tool for both Dr. Magee and Bancroft.  Bancroft explains that when looking specifically at the surface roughness of Cirrus cloud ice crystals, “The attachments to the SEM that allow us to transfer ice without it melting or sublimating also allow us to grow ice in the microscope so we can analyze it as it grows or sublimates.”  Bancroft became such an expert at using the new electron microscope that he worked for the Physics Department as its first student SEM technician, teaching both students and faculty members how to use the new technology.  He remarks that if Dr. Magee is the most proficient in using the SEM, that perhaps Bancroft himself is second.  Dr. Magee recalls, “As Lucas began working with me on research and with the new SEM instrument, I was very impressed with the maturity and skill he showed in his approach.  He was not daunted by learning complex technology, and he quickly became an expert user.”  The research done with Dr. Magee as well as working with the new SEM technology ultimately helped Bancroft decide that he wanted to go into the field of atmospheric sciences.  Bancroft describes how, “The mixture of lab and field work and the importance of the research on a global scale was what really appealed to me. I eventually want to work with renewable energy and this seemed like a good way to get there from a physics background.”

As an undergraduate, Bancroft went with Dr. Magee and three other research students (Katie Boaggio, Kevin Hurler, and Manisha Bandamede), to the International Conference on Clouds and Precipitation (ICCP) in Manchester, England.  Bancroft and his peers were four of only nine undergraduate students who attended the international conference.  The TCNJ students had co-authored a presentation given by Dr. Magee, and Bancroft was the main presenter of the poster that the MUSE research group had created.  From an academic standpoint, Boaggio describes Bancroft as “hardworking and always ready with ideas.”  Moreover, she says that Bancroft is “a wonderful person to be around” and goes on to explain how calming a presence he had on everyone during the nerve-filled seven-hour plane ride to Manchester.  As much of an influence that Bancroft had on those around him, they seemed to have the same impact on him – especially Dr. Magee. When asked about his favorite part of the conference, Bancroft replied, “My favorite part of the conference was definitely when Dr. Magee gave his talk and ran out of time because everyone was so interested in possibly collaborating with him on future research. It made me feel proud of our work and excited for Dr. Magee to have these opportunities open up for him, having worked so hard.”  For Bancroft, “The ICCP was actually really helpful in giving me an introduction into my field now.” 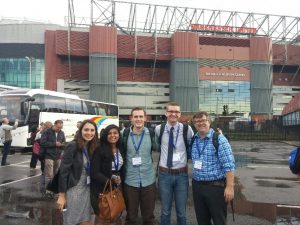 Although Bancroft admits his current doctoral research is unrelated to the research that he performed with Dr. Magee here at TCNJ, he describes a transition from undergraduate to graduate life is very smooth, in large part due to the resources and classes he had at TCNJ.  Bancroft cites the colloquium lectures and events held by the School of Science – and specifically the Physics Department – as particularly helpful to him as an undergraduate student.  Bancroft took advantage of going to these lectures during his time at TCNJ largely because it gave him insight into the research being performed around the country and globe, and it gave him the opportunity to see how they were developing their theses into procedures.  Aside from the colloquia, Bancroft attributes his smooth transition into grad school to the classes he took and the professors he had at TCNJ, most especially Dr. Magee.  Bancroft states, “Dr. Magee has deeply influenced my undergraduate life in the most positive way.”  Although he misses grass, trees, and the color green in general now that he’s in Nevada and still adjusting to the sheer volume of students that attend the University of Nevada, Bancroft remarks that, “My graduate classes are a piece of cake after going through TCNJ’s Physics Department.”

Currently, Bancroft is studying in the Environmental Analysis Facility at the Desert Research Institute.  His research is focused on analyzing Black Carbon (BC) and Brown Carbon (BrC) from different sources.  Due to their optical properties and how they affect the climate, Black Carbon and Brown Carbon are a large focus for research in atmospheric science.  When asked about his specific role in this research, Bancroft explained, “Personally, I will be finding out how to find how much of a sample can be attributed to specific sources like diesel engines, burning/smoldering biomass (e.g., wildfires), and dust.” Bancroft ultimately hopes to work to enhance the current technologies for renewable energy.  His dream job would be to work at NASA Goddard Space Flight Center in Maryland.

It’s clear not only from the work that he produces, but also the high regard with which those he encounters hold him, that Lucas Bancroft will continue to find success wherever he may seek it.