Magee Has His Head Up in the Clouds

Growing up in Northeastern Ohio right in the buckle of the Snowbelt, Nate Magee became interested in physics and atmospheric science when he observed lake effect snow, which occurs when cold winds picked up moisture from the Great Lakes and dropped it in the form of 150 inches of snow a year in his hometown. “One of the things that I thought was interesting about lake effect snow is that it is notoriously hard to predict, so the weather forecasters were bad at predicting them.” Magee explained, “so, I tried to figure out how could I do a better job at predicting this than the weather forecasters.” 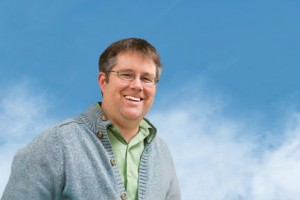 Magee attended Carleton College in Minnesota where he majored in Physics as an undergraduate. In his junior year, he participated in an REU (Research Experiences for Undergraduates) summer program in the University of Alaska-Fairbanks, where he studied climatology and met his future wife, Dr. Maggie Benoit.

After graduating with a B.A. in Physics, Magee studied at Pennsylvania State University for his Ph.D. in Meteorology. Afterwards, he worked as a professor at Wentworth Institute of Technology in Boston on a tenure track faculty position. A year later, he joined his wife at TCNJ as a visiting faculty member, and he became an assistant professor in the Physics Department in 2008.

His current research involves experimental cloud microphysics, “basically trying to understand what is happening inside clouds,” Magee clarified. Specifically, he is looking into cirrus clouds, which are the high thin clouds that are typically located between a 25,000 to 50,000 feet altitude in the air at about -50 degrees Celsius. “They are so high and so cold that the easiest way to get up there is with a jet.”

Setting up careful experiments to study these cloud systems would be pretty difficult to perform on a jet, so Magee grows his own ice crystals in his third floor laboratory, which houses a giant freezer that can get to the low temperatures found in the atmosphere.

Understanding cloud systems is important for climate change predictions. “We have computer models that predict how we think these clouds should work and evolve, when they should be there and when they shouldn’t be there.” Magee explained. Theoretical predictions do not match satellite pictures of the cirrus cloud system, “so there is some mismatch between our theoretical understanding and our clear pictures from satellites,” he added.

For his research, the physics professor uses an Environmental Scanning Electron Microscope (ESEM). By using this high-powered microscope, Magee and his student collaborators can take images of their lab-grown ice crystals. Magee proudly states that they “have been able to get the highest resolution, highest magnification, images of ice crystals that anybody has ever gotten.” 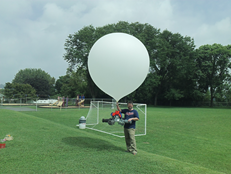 Attaching the apparatus to a weather balloon, they sent it up on its way 60,000 feet into the air. Inside it was a phone with a GPS tracking application and a collecting chamber filled with liquid nitrogen. When the balloon popped and the parachute was deployed, Magee would use the GPS coordinates to collect the ice crystals and drive over to Microscopy Imaging lab to take images.

The launch was successful and ice crystals were collected. However, there were still some problems that arose. “On its way down the cell phone shut itself off because it got too cold,” recalled Magee. Luckily, the device had a tag with his number, which someone used to call him. Additionally cold-stage microscope was malfunctioning that day, so Magee took pictures using a different microscope that did not have all the necessary features.

Made up of Styrofoam and held together by duct tape, the device is currently sitting in the corner of Magee’s office and waiting for the next launches Magee hopes to do this semester.

Outside of research and class, Magee runs TCNJ’s weather station and helps oversee the teacher preparation secondary education program for Physics and other sciences. “I find that to be a very rewarding part of my job,” he explained. “[It] is to see the science that our students learn here, take it out, and become really good teachers in New Jersey high schools.”

“Dr. Magee is someone in the physics faculty I can call a friend,” said Michael Wijokowski (‘14), one of Magee’s research students. “He really is one of those teachers who tries hard to facilitate student learning and does not doubt that everybody is capable of learning.” Wijokowski added.

When this experimental cloud microphysicist is not teaching mathematical physics, advising future science teachers, or working with his student researchers, he can be found at his home gardening and being a dad to his two children.