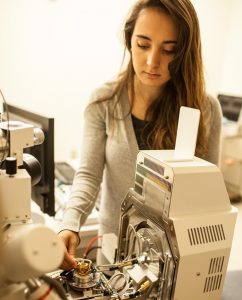 She looks up at the sky a different way from the rest of us.  She’ll tell you the difference between cirrus, stratus, and cumulus clouds and then she’ll tell you what composes them. The sky has no limit, and neither does Katie Boaggio when diving into the realm of atmospheric science.

This senior physics major and math minor has gone beyond looking at colorful textbook diagrams of the atmosphere. Boaggio has toured cloud chambers in Manchester, England, launched balloons into Ewing’s sky, and worked diligently with her research on the surface structure of ice crystals found in cirrus clouds.

Although the College does not have a specific atmospheric science major, that has not stopped Boaggio from studying what – for most of us – is the unknown. She admits to putting thirty to forty hours a week into her coursework.  “It’s like a full time job,” she says.

However, her hard work has paid off. In July 2016, she attended the International Conference on Clouds and Precipitation (ICCP) at the University of Manchester, England, where she presented her research on ice crystals. Among almost 2,000 graduate students were five undergraduates from TCNJ.  Boaggio toured the cloud chamber there, had dinner at the Manchester United’s soccer stadium, and learned even more about her area of study. It was the perfect playground for Boaggio, as the atmospheric science program at Manchester includes one of the leading international labs for research on ice crystal physics and provides an environment to develop innovative ideas for future experiments.

Nearing her last year at the College, graduate school is on Boaggio’s agenda. She is looking at institutions on the east coast or somewhere in the Midwest where she can better observe the storms. It seems just like yesterday when she started at TCNJ as a first-year civil engineer major and worked her away until she found her niche.

In the summer of 2016, Boaggio spent 10 weeks on a full-time research project that focused on the surface structures of cirrus ice crystals. This research project, funded by a grant from the National Science Foundation (NSF) to her TCNJ physics faculty mentor Dr. Nate Magee. The project allowed her to examine how the surface of the ice crystals impacts the reflection light and other forms of electromagnetic radiation.  Her data are directly relevant to the overall amount of radiation that goes into and accumulates in the atmosphere, which has a direct impact on global climate change.

Outside of her research lab and other physics labs, Boaggio is practicing her poses in the Humanitarian Yoga Club and working up a sweat at the Zumba classes offered by the Recreation Center. She’s watching the TV shows Friends or Dr. Who and grabbing a bite at the Education Cafe.  She also tutors four hours a week for the Physics Department during their open door sessions. 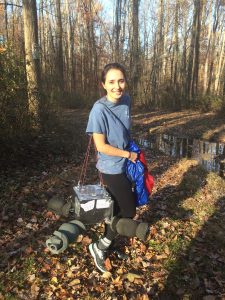 While the physics field tends to have more men than women, Boaggio is not intimidated. “Here at TCNJ, I have never felt pressure.”  Her advice for incoming physics majors: “Talk to the professors and make the most of their office hours.  Talk to other people in the major and ask upperclass students for advice. Take notes, work with others, and prepare formula sheets.” Her favorite class was The Physics of Clouds and Climates with Dr. Magee in her junior year, which led her into her current research.

As graduation nears, Boaggio says she’ll miss “the size of the classes here; they’re not too big or too small.  I love Terhune [Orchards] and the area in general.” Also, she enjoyed the balloon launches her research entailed. “I would watch them land near campus and that’s how I would obtain the ice crystals,” she says.

As Boaggio looks up at the sky waiting for her balloon, we look forward to see where she lands next.