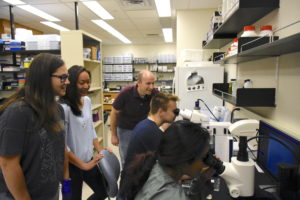 Dr. Gary Dickinson’s research employs an interdisciplinary approach to study biological adhesion, biomineralization, and larval behavior in marine animals including barnacles, crabs, and bivalves. In particular his group is interested in how environmental stressors—such as ocean acidification and global warming—affect the mechanical, structural, and biochemical properties of invertebrate shells and glues. Dickinson’s new $185,000 NSF award will allow his team to study how the barnacle exoskeleton (the rigid external covering that protects the animal’s body) forms by examining the very early stages of exoskeleton development. The group will also study how that formation process changes when barnacles are grown in warmer and more acidic waters. This research will not only provide novel data on the formation of an interesting and potentially useful material, it will also investigate how an economically and ecologically important organism will respond to predicted future ocean conditions. Under the supervision of Dr. Dickinson and his collaborator, all of the work for this NSF-funded project will be conducted by undergraduate researchers. 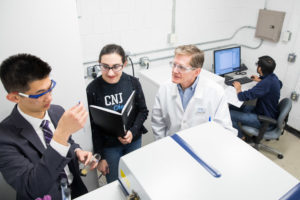 Dr. Donald Hirsh is a biophysical chemist whose research program has several strands; his new $180,000 NSF grant specifically focuses on a type of marine phytoplankton, the coccolithophore Emiliania huxleyi. Marine phytoplankton collectively contribute more than half of Earth’s oxygen and are responsible for more than 90% of photosynthetically derived carbon in the oceans. Despite extensive past research on the physiology, calcification, photosynthesis, and host-virus interactions in in these phytoplankton, there is a critical gap in understanding the genetic and cellular mechanisms controlling their responses to environmental changes. This gap is largely due to a lack of scientific tools to experimentally manipulate gene expression and elucidate the function of key genes. This project aims to develop a novel approach for genetically manipulating coccolithophores leveraging the well-characterized lipid-based interaction between coccolithophore cells and viruses that routinely infect them at sea. Dr. Hirsh and his undergraduate research team will research and develop a lipid formulation that fuses with the cellular membrane of E. huxleyi. They will then develop a formulation for gene delivery to the organisms.