The Department of Physics has won the 2018 TCNJ Mildred Dahne Award.  This award is presented annually by the Faculty Senate and recognizes departmental or program excellence.

Applications must demonstrate excellence and outstanding achievement in three of the six categories:

All applications must address the first category, “Excellence in teaching and/or support of teaching.” Departments or programs may then select two additional categories for consideration. 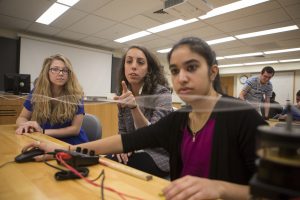 The TCNJ Physics Department remains distinctive in its commitment to excellence and the individual attention given to our undergraduate students. The Physics Department enrolls on average 80-100 physics majors, and it is recognized annually by the American Institute of Physics as one the top producers of physics majors in the United States. The most recent report of the American Institute of Physics ranks TCNJ’s Physics Department in the top 1% nationally for physics graduates among 496 non-PhD granting institutions in the U.S., and in the top 5% nationally among all 751 PhD and non-PhD granting institutions in U.S.