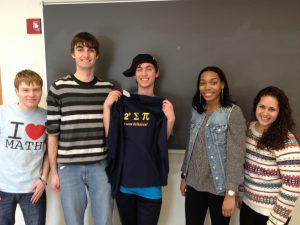 If you ask freshman applied mathematics major, Christian Tucker what he is passionate about, the answer you would receive is simple: mathematics.  Ever since middle school, he would join any math club he could find.  When he first came to TCNJ and found out that there was a Mathematics and Statistics Club on campus, he jumped at the opportunity to meet with other students who were as passionate about math as he was.  He soon discovered that it was also something more.

“There are days when I am really overwhelmed with homework, or my class introduced something really new and I am stumped on it,” says Tucker. “So I sometimes go into the week a little bit frustrated, but then I go to Math and Stats club.  Being around the other members helps me relax a little bit, and I feel like I’m ready for the rest of the week.” 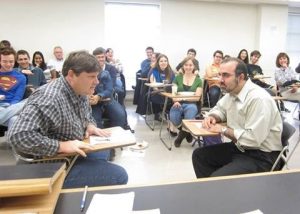 However, being a math expert is not a requirement for students interested in joining.  With a relatively young executive board (the co-presidents are sophomores), the Math and Stats club has evolved throughout the years to become not only a source of connection for students in the Department of Mathematics and Statistics but a place where students know they can find a smiling face and a helping hand. Dr. Carlos Alves, associate professor of mathematics and one of the faculty advisors for the club, says “It’s an outstanding e-board, even though they are all young. It’s a lot of fun to work with them because they are willing to ask for advice, they’re receptive to our feedback, and they are self-sufficient.”

Kate O’Connor, a freshman math education major who is also the club’s publicist, believes the organization has helped her realize her own leadership potential. She says, “I was always very shy in high school, and just by putting myself out there and becoming a part of the executive board, I have improved my communication skills, learned to relax a little bit, and realized that there is a fun side to school.” 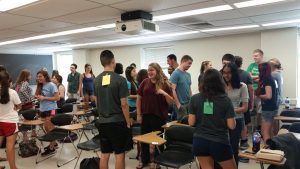 Every Wednesday from 12:00pm to 1:00pm, members of the club come together to talk about their days, play math-oriented games, and help each other with their course work. Vice-President and junior Emily Thompson, a math and elementary education major, explains how meetings can consist of Mathlete Matchup to Cramium (with an m) to discussing their next field trip. In fall 2015, the organization put on its first Mathlete Matchup, a family feud-style game in which a team of five students face off against a squad of five professors.

“I know most of the professors by now just because of the events that we have had when we were able to talk to them outside of the classroom setting,” says Co-President and sophomore math elementary education major, Marisa Pope.  She fondly remembers playing Cramium, a jeopardy-style game played frequently with students and faculty.  Dr. Alves believes that events like these “help the students see us as people, that we can goof around and have a good time outside of the classroom.”  On a recent field trip, the club visited the National Museum of Mathematics, Manhattan’s only hands-on mathematical science center and the largest public outdoor demonstration of the Pythagorean Theorem. 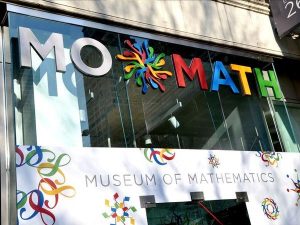 The organization also provides opportunities for members to learn about which classes are being offered the following semester and also allots time for professors to talk about what the courses will entail.  Pope says she highly benefited from the discussions about registration when she was new to the TCNJ: “You really get introduced to the classes you’re going to be taking not only next semester, but in the future as well.”

Contrary to common misconception, the Math and Stats Club does not only consist of students who are majoring in these fields.  Students studying biology, psychology, and engineering frequent the meetings and events.  Thompson believes this is because the club provides a support network and shows the fun side of a subject that is known to present challenges. “Someone over the semester called it ‘The Math Family,’” says Thompson. “And it really is – it’s a way to find your place.” 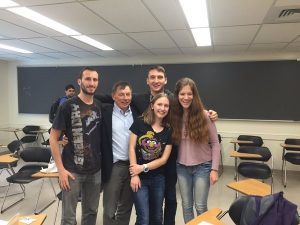 In spring 2015, the club hosted its first ever Candy Casino Night, where participants tried their hand at card games like blackjack, roulette, and Texas hold ‘em – with the prize being candy, of course. The event also included a mocktail bar that featured “square rootbeer floats” and “minimum and maximumosas.”

“Don’t be afraid to come to one our Math and Stats Club events.  You’ll see what a laid back and fun environment it is,” says Thompson.