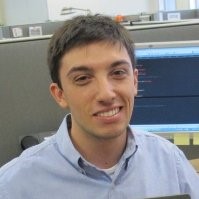 Meet Brandon Gottlob, computer science major and one of the creators of the College’s popular mobile application, TCNJ Connect. The application provides the essentials for navigating TCNJ life as a student, allowing its users to stay updated on vital campus information such as dining hours, resources, calendars, media, and emergency and healthcare options.

Gottlob became involved in the project during the spring semester of his freshman year. “Another student who was doing research for credit had initially come up with the idea for TCNJ Connect.  I kind of hopped on the project with him and helped him build it from the ground up,” he says.  Gottlob spent most of his sophomore year working on the app for the iPhone while another student worked on the Android version.

Since then, Gottlob has been completing project after project.  In his junior year, he worked on the Room Occupancy Detection System, a program allowing users to stay updated on when study rooms are available or occupied in the TCNJ Library. He proposed using a common motion detector attached to a small self-contained computer to collect data on movement in the study rooms. While the project could not be implemented due to its cost, Dr. Deborah Knox, associate professor of computer science and mentor for the project, believes Gottlob’s vision and contributions were logistically innovative.  Gottlob was able to present that research at a computer science conference in Kansas City.  During his senior year, he again partnered with Dr. Knox, using a Monte Carlo program that would simulate stock portfolio performance. Gottlob hopes to continue with this project after graduation.

During TCNJ’s Welcome Week, it was fortuitous that freshman Gottlob sat down next to Dr. Knox at the annual computer science faculty luncheon.  Gottlob spoke to her about his previous experience creating iPhone applications and inquired if there was anyone doing that at TCNJ. “The rest was history, I guess!” said Gottlob.  “If I didn’t interact with any faculty my first year, then I would probably have only had one half-year long research experience under my resume instead of three projects,” says Gottlob as he reflects on those first few days on campus which were followed by four years of research at the College.

“What surprised me about Brandon was his ability to work with a senior designer as his peer,” says Dr. Knox. “As a freshman, Brandon had a lot to learn, but he wanted to engage at a very high level. He was motivated to learn and did a good amount of self-study to put himself at a level where he could make contributions. His level of commitment and contributions were essential to the success of the completion of TCNJ Connect.”

During his senior year, Gottlob was able to balance working on research project after research project, serving as president for two campus organizations and maintaining websites as part of his internships.

As President of both the Association for Computing Machinery (ACM) and the Mobile Application Development Club at TCNJ, he gets to enjoy a more social side to computing by building a community for those interested in software development.  “Coming to college I thought, ‘Okay, I’ll do computer science and sit behind my computer and make things and never have to talk to anyone.’  But getting involved in that whole social side was a lot more than what I bargained for – but in a good way.” 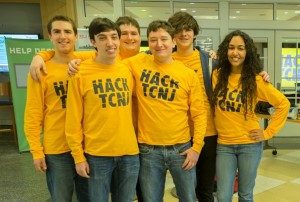 ACM provides the opportunity for members to attend tutorials on a new programming language or platform just introduced in class. In spring 2016, the club hosted HackTCNJ, a 24-hour coding extravaganza known as a hackathon, with prizes going out for the best user experience or the funniest hack. “It’s mayhem,” says Gottlob. “It’s like 200 people hunting for food for 24 hours.”

During the summer of 2014, he interned at AmeriHealth Caritas, creating a website for the Enterprise Information Management (EIM) department. He designed and created the site independently, but says that the experience was really about learning how to gauge what EIM employees envisioned their site to look like and how to communicate with other divisions in the company in order to complete that vision.

The hard work has been followed by many accolades.  In the fall of 2014, Gottlob was one of two science majors selected as inaugural scholars for the New Jersey Governor’s STEM Scholars Program.  In spring 2015, Gottlob was inducted into Phi Beta Kappa, the oldest honor society for liberal arts and sciences in the United States, which only accepts ten percent of its candidates. 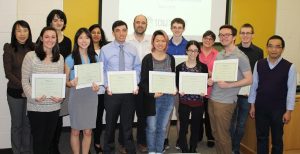 In his final semester, Gottlob received a Senior Award from the computer science department.  Dr. Knox, who presented the award, was sad to see her longtime student go. “It has been my privilege to work with Brandon these past four years, both in the classroom and in the research lab,” says Dr. Knox. “It was a special opportunity –-perhaps a once-in-my-career type of opportunity – to mentor an undergraduate for that span of time.”

Gottlob has officially accepted a job offer from CareKinesis in Moorestown, New Jersey, a medication management and distribution pharmacy, where he will be making software that deals with medicine prescriptions. 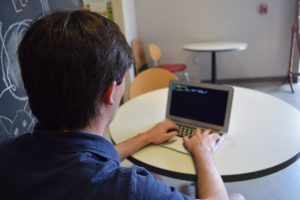 Looking back on his four years at TCNJ, Gottlob hopes that first-year students will not be discouraged from sticking with the major because of its challenges. He can relate to the feeling of dejection when something goes wrong with a program, but he believes that problem solving is one of the most important skills for a computer science major.  His advice: “Instead of just thinking, ‘If I put this code in, my program works,’ focus on why that program works.  It will give you an understanding of the big picture and also help you become more comfortable with programming and building your own solutions.”