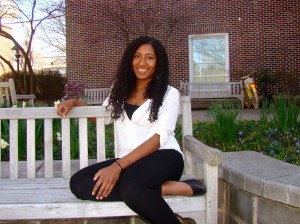 Questions such as “How does lightning work?” and “How do shells get on the beach?” racked the mind of Danielle Flood as a child. Now a senior biology major, Flood admits to always being curious about nature when she was younger as she would ask her parents countless science-related questions.

Flood’s passion to learn has continued to the present day.  One of her most recent works, a paper titled “Histone H3k36 Methylation Regulates Pre-mRNA Splicing in Saccharomyces cerevisiae”, has been accepted for publication in the peer-reviewed biology journal RNA Biology. Flood just returned from a conference in San Diego in early April (the second national conference to which she was invited) where she presented her poster on the same topic. “All my research has been leading up to this paper, the summation of things I’ve been working on since freshman year,” she says. 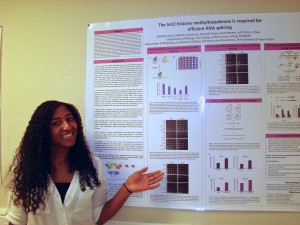 Flood has been conducting research on the biological model organism yeast, in which she has observed the coupling between transcription and splicing during gene expression. Dr. Tracy Kress, associate professor of biology and Flood’s faculty research mentor for the past four years, mentions how Flood is also a mentor to other students.  “She is a smart, critical scientist with a solid work ethic and excellent communication skills,” says Dr. Kress.  Flood says that Dr. Kress has influenced her research project and has been her inspiration to continue pursuing science. “She’s my role model,” says Flood.

Furthermore, as part of the executive board of Beta Beta Beta (or Tri-Beta, the national biological honor society), Flood helps to make sure everything runs smoothly for the community service portion of the organization and works closely with the William Hedgepeth Middle School science program. Assisting during TCNJ open houses, giving tours, and answering any aspiring biology major’s questions are all part of Flood’s Tri Beta duties.  As treasurer of Tri Beta, “Danielle has not only managed our finances but has also contributed above and beyond for the honor society,” says president and fellow biology major Summer Nestorowicz. “She’s always at my side to help organize different events like the blood drive or ‘Darwin Day’ and always has a positive, friendly attitude.”  Nestrowicz exalts Flood’s active hand in research, service, and social aspects of biology. “Danielle is a great example for biology majors,” she says. 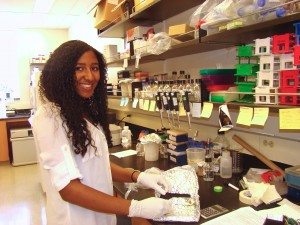 Serving as a lab assistant for Biology 211: Biology of the Eukaryotic Cell, Flood also has the tasks of making the chemicals and buffers used in labs, as well as going to the lab section and helping the professor answer any questions or help students learn techniques during the lab period.

Currently, Flood is in the process of working on her capstone project, incorporating a lot of the data from her paper accepted for publication in RNA Biology and her conference poster.  She has applied to a few programs in which she can shadow different types of doctors during their rotations. “I’m looking for positions that will help me get more patient clinical hours and patient care,” says Flood. Even in high school, Flood fed the medical practitioner in herself as she worked as an EMT taking patient vitals and history while riding in the ambulance with them to the hospital.  She plans to apply to medical school for admission in the Fall of 2017.

Upon her admittance to TCNJ, Flood was accepted into the Gateway Scholars Program, a program created to encourage students typically underrepresented in the sciences to explore research-based careers. One of the requirements of the Gateway Program was a Mentored Undergraduate Summer Experience (MUSE), an eight-week program at the College where students conduct research. Flood said she enjoyed it because, “It was the first time being in the lab for long periods of time and being immersed in the science I was studying.”  Furthermore, Flood was also accepted to a Research Experience for Undergraduates (REU) at Purdue University in Indiana where she studied the role of set 4 in antifungal resistance in yeast – a new topic for her.

Flood wants to break into the medical world with the important goal of representing women in the sciences. “While TCNJ is very facilitative to opening the field up to women and encouraging women to explore more STEM fields, I want to encourage other women to get involved and ask questions even if the gender ratios seem discouraging.”