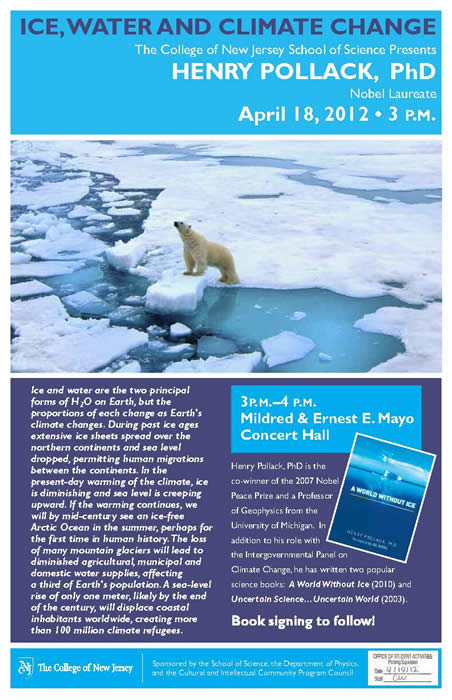 The School of Science is honored to welcome geophysicist and Nobel Laureate Dr. Henry Pollack to TCNJ on Wednesday, April 18, 2012.

Please join us from 3:00–4:00p.m. at the Mildred & Ernest E. Mayo Concert Hall for his talk entitled “Ice, Water, and Climate Change.”

A book signing and reception will follow the presentation.

Dr. Henry Pollack is the co-winner of the 2007 Nobel Peace Prize and a Professor of Geophysics from the University of Michigan. In addition to his role with the Intergovernmental Panel on Climate Change, he has written two popular science books: A World Without Ice (2010) and Uncertain Science…Uncertain World (2003).

Presentation Abstract: Ice and water are the two principal forms of H2O on Earth, but the proportions of each change as Earth’s climate changes. During past ice ages extensive ice sheets spread over the northern continents and sea level dropped, permitting human migrations between the continents. In the present-day warming of the climate, ice is diminishing and sea level is creeping upward. If the warming continues, we will by mid-century see an ice-free Arctic Ocean in the summer, perhaps for the first time in human history. The loss of many mountain glaciers will lead to diminished agricultural, municipal and domestic water supplies, affecting a third of Earth’s population. A sea-level rise of only one meter, likely by the end of the century, will displace coastal inhabitants worldwide, creating more than 100 million climate refugees.

The presentation is sponsored by TCNJ’s School of Science, Department of Physics, and Cultural and Intellectual Community Program Council.

EWING, NJ… A Nobel prizewinner will be coming to The College of New Jersey to speak about “Ice, Water and Climate Change” on Wednesday, April 18 at 3 p.m.

All are invited to attend the colloquium, which will take place in the Mildred and Ernest E. Mayo Concert Hall.

Henry Pollack – a geophysics professor emeritus from the University of Michigan, member of the Intergovernmental Panel on Climate Change, and past advisor to the National Science Foundation – won the Nobel Peace Prize in 2007.

He shared his award with former Vice President Al Gore and the other members of the IPCC, a group that was established in 1988 by the UN General Assembly.

The award recognized the individuals’ “efforts to build up and disseminate greater knowledge about man-made climate change, and to lay the foundations for the measures that are needed to counteract such change,” according to the Nobel Prize Committee.

In addition to his other roles, Pollack has written two popular science books and has received praise from Al Gore among others for his work spreading awareness on climate change.

“I have come to know and respect Dr. Pollack as an engaging and effective communicator, a scientist with the rare ability to engage ordinary people and translate scientific ideas into everyday terms that are easy to understand,” said Gore in a review of Pollack’s most recent book A World Without Ice.

Uncertain Science… Uncertain World (Cambridge University Press, 2003) discusses a variety of issues including the greenhouse effect, the dangers of anthrax, responses to foot-and-mouth disease, and the prediction of earthquakes. A World Without Ice (Penguin, 2010), which focuses on climate change, was selected for the 2010 shortlist for Royal Society Prize for Science Books, and named one of the “Best Science Books 2009” by Library Journal, the most-read trade publication for librarians.

“Ice asks no questions, presents no arguments … listens to no debates. It is not burdened by ideology and carries no baggage as it changes from solid to liquid,” writes Henry Pollack in A World Without Ice. “It just melts.”

The event, which is being sponsored by the School of Science, Department of Physics and the Cultural and Intellectual Community Program Council, was made possible by Associate Professor Maggie Benoit from the Department of Physics, who invited Pollack, according to Assistant Professor of Mathematics and Statistics Jana Gevertz and Professor of Chemistry Danielle Guarracino, co-chairs of the School of Science Colloquium Committee.

Gevertz said that the event hopes to target “a broad audience” with Pollack’s high-profile persona and his discussion on the societal consequences of changing proportions of liquid water and ice on Earth.

“Dr. Pollack is a highly well-respected geophysicist who has conducted scientific research on all seven continents and has traveled regularly to Antarctica… We invited Dr. Pollack to campus because of his ability to communicate advanced scientific topics to a general audience,” she said. “…We highly recommend that students attend his talk, as it is their generation that will be most impacted by the past, present and future scientific and policy decisions related to the climate.”