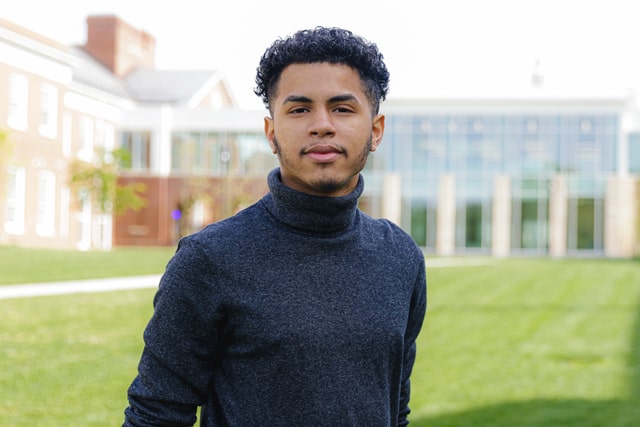 For Javier Morales, seeing fireworks decorate the night sky, filling the darkness with shapes and color, sparked a curiosity and a love for physics.

It wasn’t the spectacle of the event, but the control of the pyrotechnics, that made him want to pursue the field of physics. “Thinking about how incredible it was that people determined what shapes they made in the sky and at what altitude they went off piqued my curiosity,” he says.

Morales, a physics major and newly minted graduate of TCNJ’s Class of 2021, will continue his studies at Princeton University, where he’ll pursue a PhD. His sites are set on a career in plasma physics, working to promote clean energy.

“I am most excited to work in the Princeton Plasma Physics Lab alongside amazing scientists,” he says.

Morales says that his journey from a high school student with “poor studying habits,” to a Princeton PhD candidate was made possible with support from programs like the Educational Opportunity Fund at TCNJ.

“I thought my high school habits would suffice but they didn’t, and I learned that the hard way,” he says. “I reached out to the program assistants for help and, thanks to them, I was able to develop a study plan that best fit me.”

During his time at TCNJ, Morales was active in groups like the National Society of Black Engineers, the Developer Student Club, and Lambda Theta Phi fraternity.

He also points to classes like Sociology of Race in the U.S., taught by Winnifred Brown-Glaude as eye-opening experience during his time as an undergraduate.

Similar to how that fireworks display inspired him to think differently, “Dr. Brown-Glaude challenged me to think beyond what I see and had a large impact on the way I view others who have different perspectives.”

These are skills he will surely need when working with the international staff at the Princeton Plasma Physics lab and when considering how best to advocate for clean energy, an often-divisive issue.

“It gave me a lens that I could use to understand the reasoning behind some of the ways people from different cultures and backgrounds think, and being able to collaborate on problems,” he says.