Recent graduate Terance Schuh ’19, a double major in Physics and Mathematics, has won the 2019 Award for Outstanding Undergraduate Research from the American Institute of Physics’ Society of Physics Students. 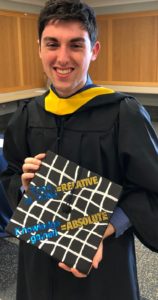 The Outstanding Undergraduate Research Award is provided to students based on exceptional research achievement in any physics-related field. Students are chosen from among qualified applicants on the basis of their research, letters of recommendation, and Society of Physics Students participation. Awardees receive up to $1,800 to cover travel and registration costs to attend one American Institute of Physics member society professional meeting of their choosing in the 12 months after receiving the award. Additionally, award recipients receive a $500 honorarium for themselves and a $500 honorarium for their Society of Physics Students chapter.

About Terance Schuh
It was not always clear to Terance what his path in physics might be, but many great mentors and lots of different experiences along the way allowed him to find his footing. He now will not only pursue a career in research, but one that allows him to help others discover the same excitement he has found within physics.

During his time as an undergraduate at TCNJ he took advantage of just about everything the Physics Department had to offer as well as the resources the SPS had to offer. Terance’s awarded research project, titled “Three-Dimensional Relativistic Jet Simulations of Radio-Loud Active Galactic Nuclei (AGN),” was conducted at TCNJ with his faculty mentor Dr. Paul Wiita. In addition to this project, he worked on a research project on “nuclear pasta” in a Research Experiences for Undergraduates (REU) project at Indiana University–Bloomington, and he is currently working on a research project at NASA’s Goddard Space Flight Center.

Terance has presented his research through posters at three international conferences and he is a co-author on a paper published in The Astrophysical Journal.

In addition to his research, during his junior year Terance served as Treasurer of TCNJ’s Society of Physics Students chapter, and as a senior he served as the organization’s President. Within TCNJ’s Physics Department, he has also held positions as tutor, laboratory technician, and  observatory technician. All of his experiences inspired him to co-write, along with another former student, a handbook for future undergraduate physics students titled, “The Unofficial Guide to Life as a Physics Major” (google it!). Terance plans on attending graduate school in astrophysics to further his career as a physicist.