Angela Capece’s Hike through the World of Physics 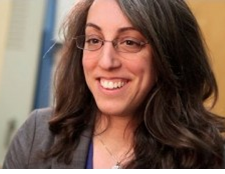 Ever since Professor Angela Capece was a kid, she’s been captivated by physics. The Pennsylvania born and raised scholar was fascinated by the Voyager mission in her youth. She went on to take a keen interest in engineering and physics, even attempting to read graduate level textbooks as a child, which—at the time—she admittedly “didn’t get very far into, predictably.”

When Professor Capece isn’t working on her research in plasma-materials interactions, one might be able to find her out running a trail, hiking, or climbing. The physics professor loves the outdoors, and especially enjoys the treat of going for a run in the snow with friends, followed by a trip to their favorite coffee shop.

While studying mechanical engineering at Lehigh University, Capece spent around 6 months at Kennedy Space Center as an undergraduate. For someone who loved airplanes, rockets, and space travel, this was the perfect place to work. She even began working toward a pilot’s license, which Capece says “I never finished and somewhat regret.” Before heading on to graduate school at the California Institute of Technology (Caltech) for Aeronautics, Capece had a taste of life outside academia in the Bettis Atomic Lab. At Bettis, she worked on a nuclear reactor to power a spacecraft that would be visiting the icy moons of Jupiter. The project was cancelled two months after Capece started working at Bettis, and she decided graduate school was where she wanted to be.

At Caltech, Capece worked on a project at the Jet Propulsion Laboratory (JPL) involving electric thrusters, which are used on many different space crafts in their orbit of earth and other interplanetary space travel. While doing this graduate work, she also picked up a minor in Physics, and while she admits this was a challenge, it was worth it to take a class taught by Kip Thorne, Nobel laureate and friend of Stephen Hawking. Capece recalls “I loved California, and it was very hard to leave,” but when she got offered a position to work at Princeton Plasma Physics Laboratory for her post-doctorate, she knew she was ready to return to the east coast.

Capece joined TCNJ’s Physics Department in August 2015.  She teaches a diversity of courses, ranging from introductory physics to an advanced course on plasma physics.  Dr. Capece’s research involves experimental studies of the interactions that occur at plasma-solid and plasma-liquid interfaces. Plasma materials interactions are important for nanomaterials synthesis, environmental remediation, plasma medicine, and fusion devices. She is specifically interested in surface modifications and the transport of reactive species in plasma discharges.  She mentors undergraduate students on a range of projects both during the academic year and over the summer.

Capece recently chaired TCNJ’s organizing committee that hosted the Conference for Undergraduate Women in Physics (CUWiP) at the College, as part of a set of regional conferences held simultaneously at 12 different locations in the U.S. and Canada. TCNJ was chosen by the American Physical Society (APS) to host the conference for the Mid-Atlantic Region, which spans five states. 300 people from across the northeast attended, including undergraduate physics majors, high school women and teachers, as well as faculty, staff and industry professionals. The event included lectures, workshops, and a networking fair. “The goal of the event is to inspire, empower, and enable young scientists to pursue their academic and career aspirations,” Capece said of the conference.

As a woman in the STEM field, the CUWiP is near and dear to the professor’s heart. Capece recalls her experiences as a woman in physics as feeling different at different points in her career. “As a postdoc, I was one of only a handful of women on a staff of about 150 scientists…I was always asked to participate in all sorts of outreach events that took me away from my research.” While it was difficult feeling like the “token woman that needed to be paraded around,” Capece says that she tried to make the situation work for her. She only agreed to opportunities that enhanced visibility in the field. She remembers fondly working with two other women at the very end of her postdoc, and she says “it helped me see how different things can be when the percentage of women is higher.”