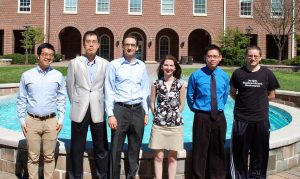 The School of Science is pleased to welcome six new full-time faculty members for Fall 2016.  Brief biographical sketches are listed below.

Michael Bloodgood (Assistant Professor of Computer Science) is a computer scientist specializing in data science, machine learning, and natural language processing. He received his B.S. from TCNJ with a double major in Computer Science from the School of Science and Informations Systems Management from the School of Business. He received his M.S. and his Ph.D., both in Computer Science, from the University of Delaware. He completed research internships at the Geophysical Fluid Dynamics Laboratory, Xerox PARC, and the University of Southern California Information Sciences Institute. He completed his postdoctoral research appointment at Johns Hopkins University. He worked as a member of the research faculty at the University of Maryland, first as an Assistant Research Scientist and then as an Associate Research Scientist, for more than five years. His Translation Memory Retrieval System was a finalist for University of Maryland Invention of the Year. Dr. Bloodgood has served as PI or Co-PI for more than $3.5 million of sponsored research. He enjoys interdisciplinary research and has collaborated with biologists, health care professionals, linguists, physicists, psychologists, and statisticians. He has published ten peer-reviewed publications with interdisciplinary author teams.

Christopher Holston (Visiting Assistant Professor of Mathematics) is a pure mathematician specializing in abstract algebra. He earned a bachelor’s degree in both mathematics and computer science at Rutgers University, and received his Ph.D. in mathematics from Ohio University. While at Ohio University, he worked with the Center of Ring Theory, publishing research with visitors from France and Turkey. His research focuses on module theory, studying injectivity and projectivity domains. His other interests include number theory and game theory. He is also very passionate about teaching, having worked with the Young Scholars Program at Rutgers. At Ohio University, he volunteered to oversee independent studies and club activities, guest lectured for student organizations, and hosted a trivia night at a favorite restaurant.

Ying Mao (Assistant Professor of Computer Science) is a computer scientist specializing in mobile cloud computing and big data platforms. He completed his Masters degree in Electrical Engineering at the University at Buffalo and his Ph.D. in Computer Science at the University of Massachusetts–Boston. His research interests focus broadly on applied computer science. In particular, he has conducted research on smartphone-based applications where he designs new communication models to boost system performance, and on big data platforms where he develops new scheduling algorithms to efficiently utilize the resources in the cluster. In addition, Dr. Mao has involved undergraduates in research on drone networks. He has served as a technical program committee member for several international conferences and published in peer-reviewed conference proceedings.

Rachel Snider (Assistant Professor of Mathematics) is a mathematics education researcher and teacher educator. After completing her Bachelor of Science in Mathematics and secondary teacher certification at the University of Michigan, she taught high school mathematics in Westwood, Massachusetts. She returned to the University of Michigan for graduate school, earning an M.S. in Mathematics and a Ph.D. in Educational Studies, with a specialization in Mathematics Education. Her research focuses on mathematics teacher knowledge and teacher education. In particular, her dissertation looked at the mathematical knowledge for teaching and reasoning entailed in carrying out the teaching practices of giving explanations and selecting examples in secondary mathematics. She is also interested in mathematics teacher education, including pre-service methods and content courses, as well as professional development. She presents her work regularly at national and international conferences, and in peer-reviewed publications.

Chung Wong (Visiting Assistant Professor of Mathematics) is an active researcher in the field of matrix analysis. He received his Bachelor of Arts degree in Mathematics from TCNJ before moving on to Drexel University for his masters and Ph.D. with a focus on the Berstein-Szego moment problem in several variables. The classical problem with one variable was introduced in early 1900s, and the solution to two variables has applications in signal processing such as autoregessive filters. In particular, he is interested in generalizing to higher dimensions and determines if there are similar applications.

Sejong Yoon (Assistant Professor of Computer Science) is a computer scientist specializing in the area of statistical machine learning algorithms and applications. He received his Bachelor of Engineering and his Master of Science degrees in computer science and engineering at Sogang University in Seoul, Korea. After working at the LG group for a year, he returned to academia to pursue his Ph.D. degree in computer science at Rutgers University. His research interests cover a wide range of applications of statistical machine learning, including but not limited to: big data analysis, sensor networks, multimedia analysis, computer vision, robotics, medical imaging and bioinformatics. His recent work is focused on decentralized processing algorithms for intrinsically distributed high dimensional input data obtained from camera networks, such as surveillance cameras. He has published in several peer-reviewed machine learning-related journals and conferences, including flagship artificial intelligence venues such as NIPS (Neural Information Processing Systems.), AAAI (Association for the Advancement of Artificial Intelligence) and ACM Multimedia.  Dr. Yoon also spent two years volunteering in Ethiopia as an IT specialist at the Federal Government Ministry of Education.