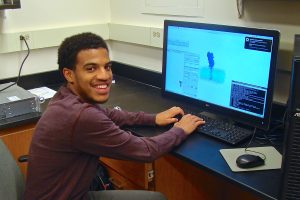 “I always used to ask, why? Why things did what they did? Why are they happening?”

Troy Brier had a chemistry teacher in high school who always challenged him in the best way possible, encouraging Brier to not just bubble in the correct letters on exams, but to learn beyond the expected material. Now, in addition to engaging in service projects with his fraternity brothers and other volunteer-oriented organizations, the senior chemistry major is conducting research to examine bacterial pillar structures and molecular dynamics.

Since spring 2015, Brier has been conducting this research with his faculty mentor, Dr. Joseph Baker, assistant professor of chemistry, in the computational chemistry laboratory.  In addition to his research during the academic year, Brier took part in TCNJ’s Mentored Undergraduate Summer Experience (MUSE) in the summer of 2015. The eight-week MUSE program further immersed Brier into this project. The research he has been conducting has involved looking at bacterial pillar structures with molecular dynamics, by using powerful computers and mathematical calculations to examine biological situations. Brier uses computers to model and simulate the dynamics of proteins called type IV pilins, which assemble into long protein filaments.  Bacteria utilize these as “grappling hooks” to attach to other cells and surfaces.  Brier presented a poster on his research at the American Chemical Society (ACS) conference in San Diego this past April. 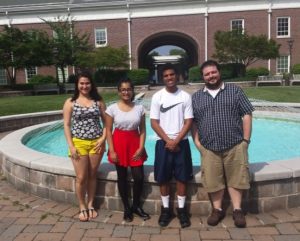 Brier says his favorite part of his academic experience thus far is this research, with one of his biggest goals at the moment being to publish the results of his research in a scientific journal.  “I like to be hands-on, to ‘do and learn’ instead of just sitting in a classroom and learning.  It’s always more fun to do it yourself than have someone talk about it.”  Brier considers himself fortunate to have been involved with such an interactive and yet-to-be-discovered project.  “We are studying topics that people have not looked into yet.”

Brier is a member of the TCNJ Student Chemists Association as well as the Foundation for the International Medical Relief of Children (FIMRC), an on-campus organization that sends members on service trips to various countries.  Brier hopes to become eligible for a FIMRC trip in his senior year where he would work in a clinic in either Costa Rica, the Dominican Republic, El Salvador, or Nicaragua.

Brier also helped establish a TCNJ chapter of the national fraternity, Delta Tau Delta.  “We were all founding fathers and we had to build something from the ground up.”  As part of DTD, Brier is involved in a variety of philanthropic events, such as co-sponsoring the Relay for Life event, volunteering at the Trenton Area Soup Kitchen (TASK), and working with kids in a troubled youth program.  Brier now serves as secretary of DTD and considers helping found a TCNJ chapter a notable accomplishment.  “Now that I’m on the executive board, I want to make this organization something that will last and have an impact for many years to come.”

A typical day for Brier is going to his morning classes, working in the lab, completing homework, and stopping at the Recreation Center to shoot some hoops.  Brier also catches some episodes of his favorite show “The Leftovers” and listens to his favorite rap music between study breaks.

In terms of a dream job, Brier is not exactly sure what he wants to do quite yet, but is leaning towards anything related to academia such as working at a research institution.  In the meantime, he continues to take advantage of what his college experience offers him.  This summer, Brier traveled to participate in a Research Experience Undergraduate (REU) program at Colorado State University where he focused on protein folding, computational studies, and molecular dynamics.  The new techniques that he learns at Colorado State will help him with his pilin protein dynamics project when he returns to TCNJ in the fall.

Brier has noticed improvement in his writing, organizational, deductive reasoning, and multitasking skills while under Dr. Baker’s mentorship, and the professor agrees.  “Working with Troy has been a great experience, and during his time in my lab, he has taken on challenging projects without hesitation and grown considerably as a researcher.”