The award, which was presented during the recent ACS regional meeting held on TCNJ’s campus, recognizes an ACS Middle Atlantic Region faculty member who encourages and stimulates high-quality teaching and research at small colleges. 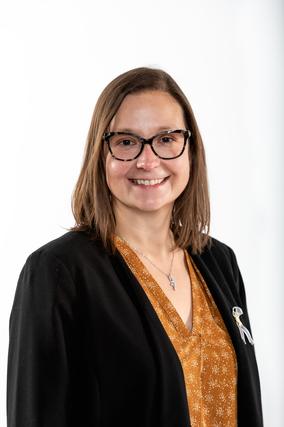 “I was thrilled to learn I had won this award, especially given it was my first year being nominated,” O’Connor said. “One of my goals with my research programs is to get students excited about the intersection of chemistry and its applications to real-world problems to generate a more sustainable society.”

O’Connor is an active teacher-scholar at TCNJ, receiving three grants since her arrival in 2010. During her tenure at the college she has mentored over 40 undergraduates in research which has resulted in several publications with undergraduate co-authors.

“At the end of our time together at TCNJ, I want my students to see the bigger picture in terms of where we want to be with sustainability and make a difference in getting us there,” she said. “I also aim to make chemistry more exciting and fun for all students in my classes. Chemistry can be difficult but if they put in the hard work and dedication, they will gain confidence and see the results of their hard work.”

She also is an active member of ACS having chaired sessions at national ACS meetings, organized symposia, and served as chair, alternate councilor, and now councilor of the Trenton local ACS section.