Down to the Research 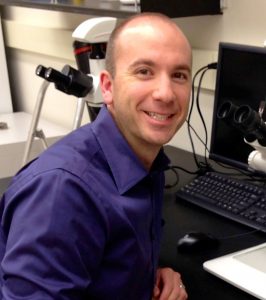 Each semester, School of Science students delve into real-world problems and solutions by conducting research with their department’s esteemed faculty. Dr. Gary Dickinson, assistant professor of biology, has been central to this narrative as both an advocate and practitioner of faculty-student collaborative research and as an experienced scientific researcher in his own right.

“I was always interested in understanding how life works,” Dickinson says in regard to his area of study. “Especially, how animals work [and] how they solve physiological problems.”

Dickinson received his undergraduate degree from the State University of New York at Binghamton. His first direct exposure to marine biology—now a central topic in Dickinson’s research endeavors—began on a study abroad trip to Cairns, Australia.

“[Cairns is] right on the Great Barrier Reef so I was able to go out and snorkel there and conduct research right on the reef,” he says. “That got me interested in marine biology, but then it was really more of the scientific themes I was interested in studying further—the idea of chemical communication and biochemistry. It just so happened to be that marine organisms are a useful study system for this.”

Dickinson continued to cultivate his passion for marine biology by entering the doctoral program at Duke University’s Nicholas School of the Environment Marine Lab. It was there that Dickinson began to conduct research on barnacle adhesion, a subject relevant to the pressing issue of fouling.

“Biofouling is the settlement and accumulation of organisms on human-made structures that get put into water such as boats, cooling systems for power plants, and oil rigs,” he says. “Typically, fouling is undesirable. It reduces fuel efficiency [and] increases emissions of greenhouse gasses.”

After obtaining his Ph.D. in ecology from Duke, Dickinson continued his research on fouling during a postdoctoral experience at the National University of Singapore in the Tropical Marine Science Institute. Following the program in Singapore, Dickinson set off on another postdoctoral excursion at the University of Pittsburgh, where he examined ocean acidification and how shell formation and mechanical properties are affected by decreasing pH levels in the ocean.  He conducted this research with a team from the university’s School of Dental Medicine.  “A lot of the techniques you would use to do that type of project are the same as you would use to assess mechanical properties of enamel on teeth or bone for that matter,” Dickinson says. “The group that I worked in mostly did regenerative medicine, so understanding mineralization and different techniques or approaches to regrow bone or teeth.” 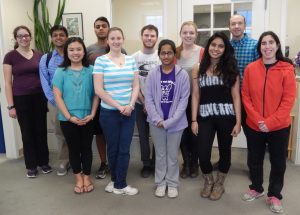 Now a member of the biology faculty at TCNJ, Dickinson feels that he is able to bring all of these research areas and interests together and share them with his students in his laboratory. “I always wanted to teach,” he says. “Even in graduate school, I knew that I really wanted to be at a place where you can work hands-on with the students and where teaching is really a priority. It’s not just something you do in order to do the research.”

Biology major Shrey Patel worked with Professor Dickinson in his laboratory during the school year and also in the summer through the College’s Mentored Undergraduate Summer Experience (MUSE) Program. The sophomore has profound respect and admiration for his mentor. “Dr. Dickinson is one of the most knowledgeable people I know and he is extremely dedicated to his work,” Patel says. “I’ve never seen someone more enthusiastic and passionate about barnacles.”

Before collaborating with Dr. Dickinson, Patel admits that he had no previous research experience and had doubts about being successful in the laboratory. However, Patel says that Dr. Dickinson has provided him with important lessons that will take him far as a scientist and as a student.

“The most valuable thing Dr. Dickinson has taught me is perseverance,” Patel says. “There have been times in the lab where I’ve been collecting data for an entire week, and after the statistics are run, all the data come out as insignificant. Disappointed, I would go to Dr. Dickinson’s office. As I walk in, I see Dr. Dickinson smiling, and even upon telling him all the data came back as insignificant, he’d still be smiling. He would immediately shrug it off and tell me to move on to the next set of data. He is always focused on the next thing. He never gives up.” 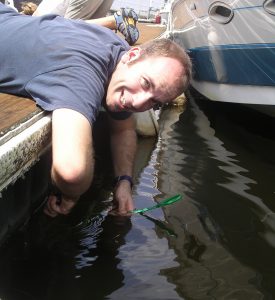 With a team of student researchers like Patel, Dickinson is sharing his passion for barnacle adhesion. They are currently examining the roles of proteins and enzymes in the barnacle’s secretion of the liquid that enables the organism to stick to a surface and endure for long periods of time in the ocean. In addition, the team also explores how adhesion and shell formation are affected by environmental change.

“One of the things I really like about my research program is that it’s very applied,” Dickinson says. “We have this [issue] of fouling which is a multi-billion-dollar problem, and if we understand the fundamental mechanisms of adhesion in the lab, then others can use the data to create a coating or paint that will prevent these animals from sticking. We can also use [the barnacle’s secretion fluid] to make things like medical glues to glue bones.”

According to Dickinson, the College’s MUSE Program serves as a driver of his research lab. This is his fourth summer participating in the summer program, and as an experienced researcher, Dickinson is able to truly recognize the value of research being part of the science student’s academic development.

“I think it’s really good experience for the students to be able to have this full-time research engagement [in order to] get a sense if this is something they’re interested in doing,” he says. “They each have their own project and all of the data is going to something [because] it’s all going to eventually get published,” he says. “It’s all telling a part of a bigger story.”

Dickinson encourages students interested in research to get involved as early as possible and to foster a genuine interest in the work. “It’s not a good thing to do if you just want to check it off a list, but if you’re really interested in the pursuit of new knowledge and understanding something that no one has studied before, then it’s worth getting involved. The sooner you get involved, the more impact you can have on the work.”

When he isn’t sharing his years of experience with his students, Dickinson enjoys cycling, running, and spending time with his two children. For now, his professional aspirations are to assist in enhancing the School of Science’s research program so that it continues to be regarded and respected by the scientific community.