Who says watching television is not educational? First-year students investigate the science behind HOUSE 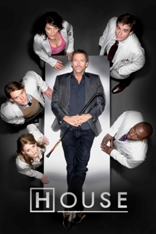 Among the famous House-isms, as the pearls of cynical wisdom from the mouth of Dr. Gregory House, M.D., have come to be known, is the reoccurring assertion that, “everybody lies.” Here at TCNJ, it is no lie though that a very fortunate cohort of first-year students have the opportunity to watch the popular television drama and learn about the science and medicine behind it through the newly designed first seminar course, “The Science behind HOUSE.”

Taught by associate professor of biology Dr. Anthony Uzwiak, the first seminar program (FSP) course is aimed not only at providing an understanding of the science and medicine depicted in the series but also to stimulate a discussion on its broader sociological themes. Uzwiak acknowledges that House is a very interesting television show meant to be entertaining and to cause people to form loose affiliations with the characters and their plights. At the same time, he says, the writers clearly know they have the opportunity to make social commentary and to inspire people to consider broader themes.

I find the show to be a kind of a morality play,” explained Uzwiak. “It has a lot of substance to it beyond understanding the medicine and pathology and thus gives students a chance to objectively look at more complex sociological issues in the context of something that is fun and compelling. We can have all kinds of lectures on ethics, sociological parameters, metaphysics and philosophy, but it is different to see it play out on a popular television show without necessarily being directly confronted by the agenda.”

The course is divided into four themes: reproductive biology, biological sex and gender, genetics, and higher cognitive functioning. For each of these themes, three episodes addressing the overarching theme are allotted to each unit of the course. For example, within the first unit on reproductive biology, students viewed a series of episodes that focused on the biological continuum of human life. After discussing the science behind each episode in class, the students were asked to consider the following question: when along that continuum of life does the fetus acquire humanity and, ultimately, where society affords relative rights to the various participants in reproduction? Students then wrote opinion papers discussing the rights of all participants, including those of the mother along with those of the father and the fetus in its various biological stages.

According to Phoebe Ling, a freshman biology major on the seven-year medical track enrolled in Uzwiak’s course, she was thrilled when she saw the course was offered because “House” is one of her favorite television shows. “I usually watch ‘House’ for the drama and of course I think it’s cool how House solves all the medical mysteries,” said Ling. “But what I love about this course is that it has made me think outside the box, beyond ‘Oh, he’s so smart’ to some of the deeper ethical dilemmas I had never considered before.”

The overall First Seminar Program at TCNJ enables first-year students to engage in an intellectually exciting and challenging experience in a small, seminar-style class. Students from the same FSP course are housed together in the same wing of the first-year residence hall, and Ling attests to the fact that the living-learning community has been an asset as she and fellow floormates wrestled with their opinions for the essay assignment. “In writing these papers, I’ve come to conclusions I never expected through research and talking with friends on my floor,” explained Ling. “Watching ‘House’ from a different perspective has developed my opinion, for example, in talking about the mother and fetus and the decision to save one but lose the other.”

Responses like Ling’s show that Uzwiak has been successful in designing a course that stimulates ethical discussions. As he notes, the show is not all about medicine and science. “Very few clinicians are sitting down and watching ‘House’ to figure out how to broaden their clinical insight,” he said. “Although we are examining a really interesting television show and considering some of the pathology and medicine, we are ultimately reflecting upon broader sociological themes that are relevant to young people and to all people within our society.”