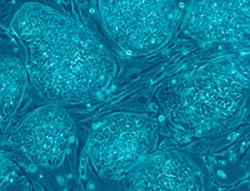 The announcement last week that President Barack Obama was ending the ban on federal funding for embryonic stem (ES) cell research came as welcome news to at least one Lion alumna. As part of her MD/PhD coursework at Yale University, Katherine Uyhazi ’05 is doing research work at the Yale Stem Cell Center under the direction of Dr. Haifan Lin. In February, Uyhazi returned to TCNJ to give a talk, “MDs, PhDs, and Stem Cells: Everything You Wanted to Know but were Afraid to Ask,” as part of the Young Alumni Lecture Series. Afterward, she told us about the stem cell research she is doing.

“The focus of my project is to explore how genes are turned on and off in human ES cells in order to gain a better understanding of how these cells normally function,” Uyhazi said. She explained that there are many signals that tell a cell either to remain a stem cell or to differentiate into a specific adult cell type; however, scientists do not completely understand what these signals are or where they come from. One possible source in determining whether this differentiation takes place is the protein Pumilio.

“Pumilio is important for normal stem cell function in fruit flies. The goal of my project is to figure out if Pumilio has a function in human ES cells, and if so, how it works,” she said.

Uyhazi is in her fourth year of the combined MD/PhD program, and started working full time in the lab with Dr. Lin last year. “On a day-to-day basis, I grow human and mouse ES cells in Petri dishes,” Uyhazi explained. These cells are “quite finicky,” she said, and “require very specific conditions such as the right temperature, the right nutrients, and the right number of cells in order to maintain their viability.”

A good deal of her lab time is also spent isolating DNA and protein from the cells, and setting up experiments to figure out how they interact with each other.

“I’ve also always been fascinated by cell division, and never get bored of watching cells divide under the microscope,” she said. “Stem cell research is an exciting field that’s progressing at a rapid pace, and I’m thrilled that I have the opportunity to participate in such cutting-edge and exciting research.”

In addition to her lab work, Uyhazi serves as a teaching assistant for a first-year graduate cell biology course this semester. And of course, “part of graduate student life is attending classes, journal clubs, seminar talks, and lab meetings,” she said. The fourth-year student said she also volunteers at a Free Clinic in New Haven that provides health care to uninsured residents. “This not only keeps up my clinical skills, but it’s a great way to remember the ‘big picture’ of why we do research in the first place,” she said. 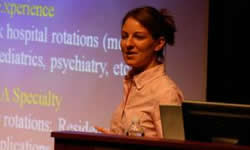 At her lecture in February, which she delivered to a packed house in TCNJ Library’s auditorium, Uyhazi explained why ES cells hold such great hope for clinical medicine. Both ES and adult stem cells can self-renew, or divide indefinitely, she said, but ES cells are also pluripotent. This means they can differentiate into any of the other cell types in the body.

“A single fertilized egg cell contains all of the information needed to form every cell in the human body,” Uyhazi explained later. “The hope is that if we can coax stem cells into becoming specific cell types, perhaps we can replace damaged tissue that would otherwise be beyond repair.”

She pointed to the FDA’s recent approval for the world’s first clinical trial to treat spinal cord injury by injecting modified ES cells into sites of injury as a precursor of what could be in store with continued research on ES cells. “Similar efforts are also underway to treat diseases such as Parkinson’s, diabetes, and congestive heart failure,” she said.

ES cells might one day help not just in disease treatment, but possibly even disease prevention, she said. “With a thorough understanding of these pathways, perhaps we can understand what goes wrong in disease states and prevent things from going awry,” Uyhazi said.

When we spoke with Uyhazi prior to last week’s announcement by President Obama, she said she was hopeful that the Bush administration restrictions on ES cells would eventually be lifted. She noted that all work being done at Yale was in accordance with the federal regulations, and said new breakthroughs in stem cell research may one day circumvent the need for embryonic stem cells.

“Researchers can now use adult cells such as skin cells and hair follicles to generate embryonic stem cell-like cells termed ‘induced pluripotent stem (iPS) cells,’” Uyhazi said. “These iPS cells can still differentiate into any cell type in the body, and thus have the same potential for studying development and disease as ES cells, but without any of the moral and ethical dilemmas raised by research involving human embryos.”

At present though, it is not known whether iPS cells are completely identical to ES cells, she said. The cells have also shown greater potential to develop tumors.

Uyhazi credited her TCNJ adviser, Steve Klug, with starting her on her current path. “I took his genetics course during my freshman year, which is what really sparked my interest in science and convinced me to become a biology major.” She also said the lessons she learned in Amanda Norvell’s Immunology class and Marcia O’Connell’s Developmental Biology class “have been invaluable in medical and graduate school.”

“Probably what I admire most about TCNJ’s biology faculty is their ability to teach how to learn, not just what to learn,” Uyhazi said. “Some of my favorite assignments didn’t have a clear cut answer, but instead required me to think on my feet and use what I knew to reason through material I’d never seen before. This kind of thinking requires higher-level learning, not just rote memorization, and it has stuck with me far beyond my undergraduate studies.”