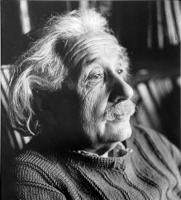 The year was 1954. At that time I was a fairly young professor of mathematics at the New Jersey State Teachers College at Trenton. I also served as the dean of men, and I frequently assisted President Roscoe L. West in hosting visitors to the College. So it was no surprise to me when President West approached me with a visitor from India, Dr. Mani, president of a teachers college. Dr. West said to me, “Dr. Mani is anxious to meet Dr. Einstein over in Princeton. Would you like to take him?” To the disappointment of both men, I said, “I don’t think it is a good idea to take up Einstein’s valuable time with a casual visit, nor do I think that we could get an appointment.” Dr. West seemed to accept my answer, but later in the day he returned to me full of enthusiasm. “Bill, my secretary was able to make an appointment for you and Dr. Mani to visit Dr. Einstein on Saturday morning. How about taking him?” This time I couldn’t say, “No!”

On Saturday morning Dr. Mani and I arrived right on time at Professor Einstein’s office at the Institute for Advanced Study at Princeton. But, to our embarrassment and disappointment, his receptionist told us that she had no record of any appointments having been made for that day, and besides, he was awfully busy. We appealed to her for a good 10 minutes, but to no avail. Finally, Dr. Mani and I decided to sit down and talk things over. By this time I was determined that we should see Dr. Einstein. We returned to the receptionist and said, “Can’t you do something? Dr. Mani has traveled half way around the world for the purpose of meeting Einstein; and, in appreciation for what he has done for the world of mathematics and physics, Dr. Mani brought him a beautiful flamingo carved out of buffalo horn. He would like to present this gift in person.” We could see the receptionist soften her attitude, and she turned to Dr. Mani and said in her heavy accent, “Oh, are you a physicist?” Dr. Mani quickly said, “Yes, Yes! I am.” With that she picked up the phone, spoke briefly to Einstein, and then told us that we may go into his office, but not to stay for more than 20 minutes. We were elated!

Dr. Einstein greeted us warmly and made it very easy for us to sustain a lively three-man conversation. Even though this meeting took place 42 years ago, I still remember it quite vividly. [This text of Bill’s story is from 1996, hence the reference to 42 years.] One of the points he made was that in any society or situation when things go wrong, it is almost natural to look for scapegoats. This is what happened in Germany at the time of Hitler when it became expedient to blame the Jewish population for all the country’s problems. I remember that he warned us that the same thing could happen in this country, and he cited the situation where Senator McCarthy was trying to blame all of Washington’s problems on the Communists. Several times I stood up and noted that we had exceeded our 20 minute limit, but Einstein said, “Please sit down. I am enjoying our conversation.” So we continued for a total of about two hours.

[Dr. Einstein] was concerned about the possible misuse of atomic energy, and, although he didn’t say so, I had the feeling that his own contributions to the development of atomic power added to his concerns. He was also very concerned about the world’s ability to maintain an adequate food supply for a population that was growing at a geometric rate and a food supply that was growing at a slower rate. It was his hope that science could reverse these rates.

Dr. Einstein also had some strong opinions about education. In particular, he expressed the thought that in this country much of our learning is motivated by the push to get good grades; whereas in much of Europe learning takes place because of the fun of learning.

Finally, Dr. Mani started to unwrap the gift he had brought for Dr. Einstein. When the flamingo was handed to Einstein, he said, “It is absolutely beautiful, and while I would love to have it, I cannot accept it since I have done nothing for you.” After some discussion Dr. Mani said, “Well, you can do something for me. I would love to have an autographed photograph of you.” Dr. Einstein readily agreed to do this, and then turned to me to see if I wanted one also; and to nobody’s surprise, I said, “I would really appreciate getting one.” Then, Einstein asked us if we would mind taking the flamingo to his house a short distance away since he always walks home and it is a little awkward for him to carry a package. We agreed to do this, and with that Dr. Mani started to wrap up the flamingo as carefully as it had been wrapped which prompted both Einstein and myself to make the mistake of saying, “You don’t have to wrap the flamingo that carefully because the house is only a minute or two away.” With that advice, Dr. Mani placed the flamingo in his cloth duffle bag and we said good-bye and thank you to Professor Einstein. We both felt fortunate in having spent two hours with such a warm, friendly, intelligent, thoughtful, and interesting world figure.

We got into the car and Dr. Mani put the duffle bag on his lap and learned forward to close the door, an action which snapped the beak off the flamingo. Well, I have never seen a person’s state of mind change from happiness to dejection as quickly as Dr. Mani’s. I felt just awful also. I decided to drive to the center of Princeton where I bought some “airplane” glue (Epoxy glue was not yet on the market). We then drove to Einstein’s house, where we sat in the car and I repaired the beak, and then I held it in place for six or seven minutes to give the glue a chance to set. We then rang the bell and were greeted by the housekeeper who was either Einstein’s sister or sister-in-law, I don’t remember which. We told her what had happened to the flamingo. She looked at it carefully and said “He will never notice it.” We then told her that he had promised each of us an autographed photograph to which she responded, “It’s a good thing you told me, since he is inclined to be absentminded. I’ll see to it that he will not forget.”

On the way back to our college residence, I said to Dr. Mani, “There is one thing that has me puzzled. I didn’t know that you were a physicist.” He looked at me strangely and said, “I am not. What made you ask?” I replied, “When the receptionist asked, “Are you a physicist?” you said, “Yes, yes, I am,” which made me think that you were.” “Oh, is that what she said?” came the reply, “I thought she said, “Are you a visitor?” Well, considering the strong accent the receptionist had, it was easy to understand how such an honest mistake was made. My friends and I have had countless laughs over one of the most serendipitous episodes of my life. 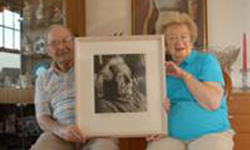 Sure enough, in about four or five days we both received our autographed photographs from Einstein. Mine was autographed, “To Prof. William Hausdoerffer, A. Einstein ’54.” It was a beautiful 11”x14” in black and white taken by the famous New York photographer Herman Landshoff. I had seen many photographs of Einstein, but I had never seen this one before or since except for the picture on the commemorative stamp issued on March 4, 1979, celebrating the centennial of his birth (He was born in Germany on March 14, 1879, and died in Princeton, New Jersey, on April 18, 1955). The stamp was designed by Bradbury Thompson of Riverside, CT, who based his design on Landshoff’s photograph. It is, without a doubt, my favorite photograph of Einstein. It is not only good technically, but it also brings out the warm, human side of Einstein. I’m sure this photograph will be an important part of [my] family’s legacy.

Bill tells the story of his meeting in his own words: