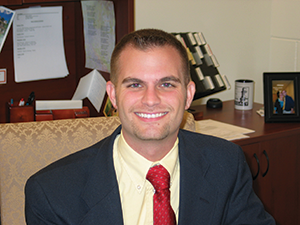 When the opportunity to volunteer with the Alumni Association presented itself, Bill Cahill ’05, MEd ’09 says he jumped at the chance.

“I’ve had so many affiliations with the College through the years,” said Cahill, explaining that he took swimming lessons and attended summer camps on campus as a child before following in the footsteps of his mother, Joyce (Crosby) Cahill ’73, and graduated with an undergraduate degree in education from the College.

“TCNJ has been a part of my entire life,” he said.

Cahill has served on the Alumni Association Executive Board since 2006, and enjoys the opportunity this involvement affords him to meet graduates of all ages and hear of their experiences as students as well their insights on College history.

“Finding out how different the College was then, or is now—it gives you a whole different perspective on your experience there,” said Cahill. “That’s been the best part of being involved.”

As Alumni Association president, a position he will hold for the next two years, Cahill hopes to foster more of this shared celebration of the College through programming and events that bring alumni of all ages together.

“Being able to share each of those experiences with others can bring about a new perspective on the College, and to have that perspective as a positive one is something that I’d like to bring about with all of the alumni who have graduated,” Cahill said. He encourages all graduates of the College to contact the alumni office and become involved.

“We’re always looking for volunteers, and have a number of committees—from Homecoming to Reunion to programming events to affinity programs—that alumni can serve on,” he added.

Cahill graduated in 2005 with a degree in biology/secondary education and taught science for four years at J.P. Case Middle School in the Flemington-Raritan School District. In 2009, he received his master’s in educational leadership from TCNJ, and switched to the administrative side. He served as vice principal at J.P. Case during the 2009–10 school year, and then was appointed vice principal of another school in the district, Barley Sheaf Elementary, in fall 2010.

In January 2011, Cahill requested to be transferred back to the classroom. He said that while he enjoyed many aspects of being an administrator, he discovered his true passion is teaching.

“What I love is working with the children in the classroom investigating science,” he said.